Welcome to our monthly update!

We begin our selection with an article on “Music as a Tool for Self-Realization in Chinese Culture, Based on the Practice of Playing the Guqin.” We provide links to recordings of traditional interpreters of this unique instrument, known as “the instrument of the sages” and as “the father of Chinese music.”

Chinese philosophers believed that the unique sound of the qin (soft, quiet, and attenuating easily, thanks to the strings made of boiled silk threads) is a sound that clears the mind (makes the mind become a mirror—Zhuangzi) and then changes the perception level from differentiated phenomena to undifferentiated unity. 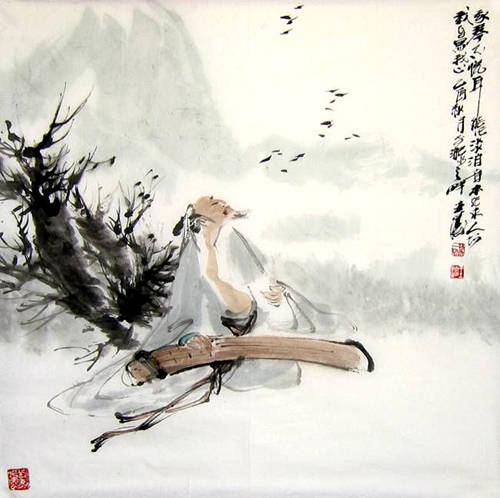 • Echoing our recent post on Saint Brendan, we have a new article on his Iberian counterpart, Saint Amaro, another pilgrim saint and mystic navigator who is all but unknown among English speakers. In her article, “The Voyage of Saint Amaro: A Spanish Legend in Nahuatl Literature,” Louise Burkhart not only introduces St Amaro’s magical ocean voyage to earthly Paradise, but she also shows how elements of Nahuatl mythology came to be mingled with the story in a Mexican version.

And then on the wind he saw the noblewoman, Saint Mary. She was resplendent. The way she was shining, she surpassed all illumination. Then Saint Amalo swooned. His precious ones thought the world quaked. Then Saint Mary consoled him, encouraged him. She said to him, “May you not be afraid. Amalo. I have come to rescue you because you prayed to me so fervently.”

• To conclude, we present a brief selection of texts from the Tao Te Ching, the foundational text of Taoism and one of the most daunting and yet appealing of the great scriptures of the world. Our bilingual text is accompanied by an original audio recording of the original Mandarin.

Those who are skilled in the Dao do not dispute about it; the disputatious are not skilled in it. Those who know the Dao are not extensively learned; the extensively learned do not know it. The sage does not accumulate for himself. The more that he expends for others, the more does he possess of his own; the more that he gives to others, the more does he have himself