Welcome to our newsletter, dear readers,

We present this month two fundamental texts on the life and the doctrines of Pythagoras, the “pre-Platonic philosopher or sage or religious genius of the sixth century BC. The first is by Iamblichus, the fourth-century Platonist, who begins with these words,

All right-minded people, embarking on any study of philosophy, invoke a god. This is especially fitting for the philosophy which takes its name from the divine Pythagoras (a title well deserved), since it was originally handed down from the gods and can be understood only with the gods’ help. Moreover, its beauty and grandeur surpass the human capacity to grasp it all at once: only by approaching quietly, little by little, under the guidance of a benevolent god, can one appropriate a little. 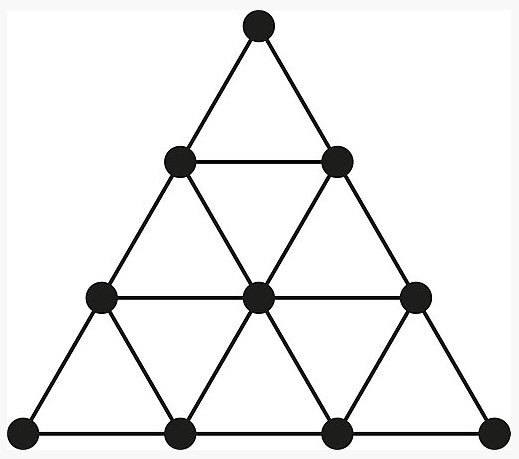 The tetraktys or “fourness” by which the Pythagoreans swore.

• The second Life is by Porphyry (possibly a teacher of Iamblichus), who studied under Plotinus in Rome from 263 to 269 CE; this means that this biography of Pythagoras comes also from within the heart of Late or Neo- Platonism, in a synthesis that would have great influence on Jewish and Islamic medieval authors— a philosophy “the scope of which is to free the mind implanted within us from the impediments and fetters within which it is confined.”

His friends he loved exceedingly, being the first to declare that “The goods of friends are common,” and that “A friend is another self.” While they were in good health he always conversed with them; if they were sick, he nursed them; if they were afflicted in mind, he solaced them, some by incantations and magic charms, others by music. He had prepared songs for the diseases of the body, by singing which he cured the sick. He had also some that caused forgetfulness of sorrow, mitigation of anger, and destruction of lust. As to food, his breakfast was chiefly of honey.

• Our third text today is a chapter on the contemporary “Desacralization of Work” by Roger Sworder, considering human vocation and our relation to nature in the light of traditional craft ethics and spirituality.

One of the most remarkable developments of the two centuries since the Industrial Revolution is the hobby. After working in the factory or the office people return home to practice in their periods of leisure what previously they would have done as work. This is the significance of gardening in a society which has mostly dispensed with agricultural labor, and of the millions of workshops in the backyards of suburban houses.